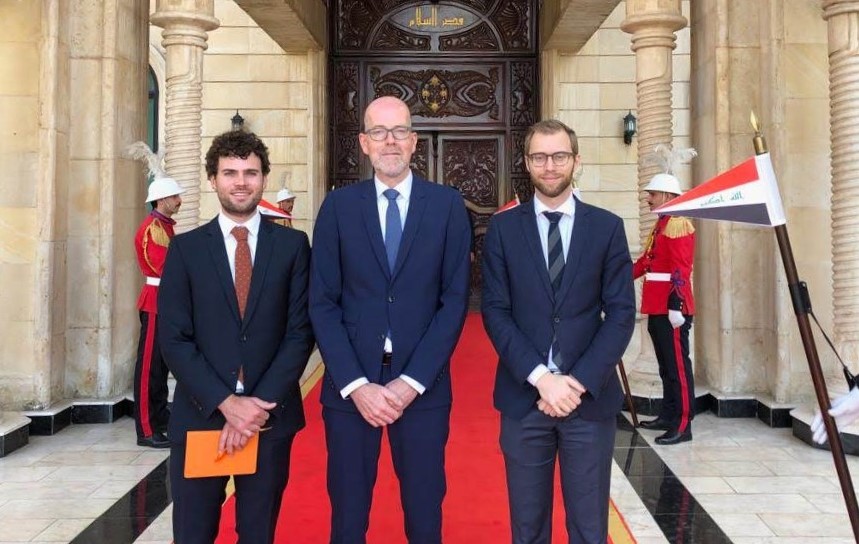 Mark Brakel (NL) and Wim van Doorn (NL) are both EYP alumni that are now working for the Dutch Embassy of Baghdad. We had the opportunity to ask them about their careers and EYP. Here is what they said:

How is it being a diplomat?

Mark: Strange, especially in Baghdad. I live on the Embassy compound with my colleagues and we require an extensive security detail to move around. It is a high pressure environment, but highly varied.

Together with another colleague, I run the economic section of the Embassy; I will spend one day at a ministry to close a contract with a Dutch company, the next one setting up an incubator for young Iraqi entrepreneurs and the third on how to restore jobs in agriculture after ISIS.

Wim: As a diplomat I sometimes feel like I have to be academic, salesperson, lobbyist, and accountant all at once. My job is very diverse. Working in countries that have gone through conflict (Libya, Burundi, Iraq), my work requires that I understand the political dynamics. To be able to do that, I have to build a large network, read relevant analyses, and have long discussions and meetings. I write political updates and advise the ambassador or other colleagues about the country I work in, and I accompany them to meetings with high-level officials, including presidents and prime ministers (which can be pretty exciting and impressive!).

In addition, in the countries that I work in, The Netherlands is often
also a partner for development cooperation, human rights, and justice. Together
with colleagues I have to decide what kind of support The Netherlands gives, for
example to remove mines, rebuild public infrastructure, or help reform the
security sector. To be able to make this decision, I meet with representatives
of governments, the UN, and NGOs.

In my work, I meet a lot of inspiring people, who are fighting every day to improve the lives of citizens in their country. Often, they take high personal risks. One of the biggest sources of inspiration in my work is to be able to help these people, even if it is with just a small contribution. However, my work has also made me more realistic about the limits to what we, as outsiders, can do – and should do – in another country.

If there were things from EYP that you could bring to real-world international relations what would it be?

Mark: EYP’s resolutions often recommend drastic action and I often wish me and my colleagues would be able to move faster as well. What’s more, EYP is all about collaboration and Europe definitely needs more of that. From the perspective of Iraqis, Europe is just another continent and I can’t help but notice that they find the differing foreign policies of European countries endlessly confusing. I wish we could speak more with one voice.

Wim: I have always found that the strenghts of the EYP project are that it is, firstly, fully youth-led rather than organized by civil servants or politicians, and secondly focuses on consensus-building between individuals, giving them an equal voice, rather than simulating a negotiation between countries as other similar projects do (such as Model United Nations). Especially when I first started my work as a diplomat and was perhaps still a bit naive, I was struck by the focus on national interests. The first question a diplomat learns to ask is ‘why does this matter to my country?’.

In contrast, I strongly believe that the work of diplomats transcends a narrow focus on interests, and EYP’s focus on consensus-building rather than power-politics could help diplomats think a bit more about the common interest. Especially in a world that faces numerous challenges that can only be addressed by global collaboration – think climate change, but for example also the regulation of artificial intelligence – I would wish that there was more of a sense of ‘we are the priviliged few who represent our countries abroad, let’s see how we can fix our world’s problems’. This definitely also negatively affects the EU’s role in foreign policy, which remains relatively weak exactly because individual states continue to pursue their own foreign policies.

What should Europe mean to youth in 2040?

Mark: In 2040, I would like youth to think of Europe as the exemplary continent they all want to learn from, whether they live in China, the US or elsewhere. A continent that safeguards human rights of women, of gays and transgenders, and of expression and assembly, and that provides enough economic security so that no one has to live in fear of growing up to be poor.

Wim: I hope that Europe will still be an open continent, and that it will have played a leading role in preventing the earth’s destruction due to climate change. The BREXIT is a step backwards. Hopefully we will have solved the policy conundrum created by the need to provide a safe haven for refugees and Europe’s need for labour on the one hand, and the massive pull that Europe has all around the world.The rise in extreme right-wing parties in Europe is a particular worry. Hopefully the continent will still remember the massive cost of the World Wars and not fall back into isolationism and discrimination.

Mark: Never underestimate how much you learn in EYP. It is much more useful than school.

Wim: I am lucky enough to be posted to Baghdad together with another EYP alumnus, Mark Brakel. EYP now also has an alumni group in Iraq!