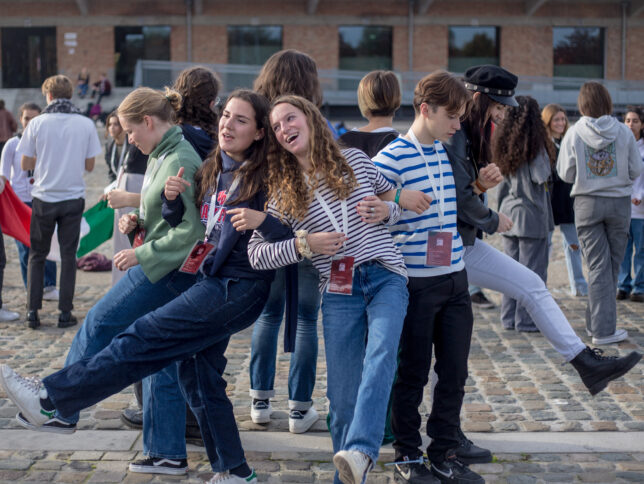 The initiative for the event was taken by the project managers Anouck Guillot, Cristian Peca and Jason Scofferi. Together with their team of organisers and the Belgian branch of the EYP network, they created a vision and found appropriate partners and venues to bring together all these young people. The facilitation and work on the academic topics and methodology implementation in the committees – each of them featuring 13-15 young Europeans from different countries was spearheaded by Sander Wagemans and his academic team, who made sure the complex content was understandable without simplifying the matters. Lastly, the media team, led by Leonoor Wijdeveld and Anait Tsaturyan, encapsulated this theme of looking in a different light in their different media projects.

The programme started with Teambuilding, a vital part of the EYP Methodology, which is aimed at familiarising the participants with each other and establishing a positive team spirit early on.  During the traditional Eurovillage young people from around 30 countries shared their local cuisines, and at Kortrijk also dances!

In the following days, the groups of young people dove into their respective topics. They researched and defined the problems and difficulties of the topic in a European context and came up with possible solutions or remedies to these barriers. Examples include such diverse topics as the possibility of a digital Euro, the rights of sex workers, and Europe’s role in combatting space debris.

The attendees did not only engage with the academic content but also enjoyed the Opening Ceremony where they were spoken to by Roberta Metsola (President of the European Parliament), Jutta Uripilainen (European Commissioner for International Partnerships), and Alain de Muyser (Secretary General of the Benelux Union).

Additionally, the programme included cultural elements where there was space for the youngsters to share their culture, such as during Euroconcert. As well as elements which aimed to showcase Belgian culture, such as the cultural day where participants could visit different Belgian cities.

The hard work of the past days came together at the General Assembly, where the resolutions written by the young participants are constructively debated and voted on. These resolutions are sent to European policymakers, who can take valuable input from the young fresh perspectives of the participants. The first day of the General Assembly took place in the European Parliament.

After the second day of the General Assembly, it was time for everyone to go home, enriched by their experience at Kortrijk. See below some quotes from participants about the impact this event had on them!

Kortrijk 2022 would not have been possible without the support of our partners. We would like to thank our sponsors, among them the Erasmus+ Programme of the European Union, the U.S. Mission to the EU, the Benelux Union, the Belgian Ministry of Foreign Affairs, the King Baudouin Foundation, the European Parliament Liaison Office in Belgium, the German Savings Bank Association, the Embassy of Finland, and the United Nations High Commissioner for Refugees Agency.