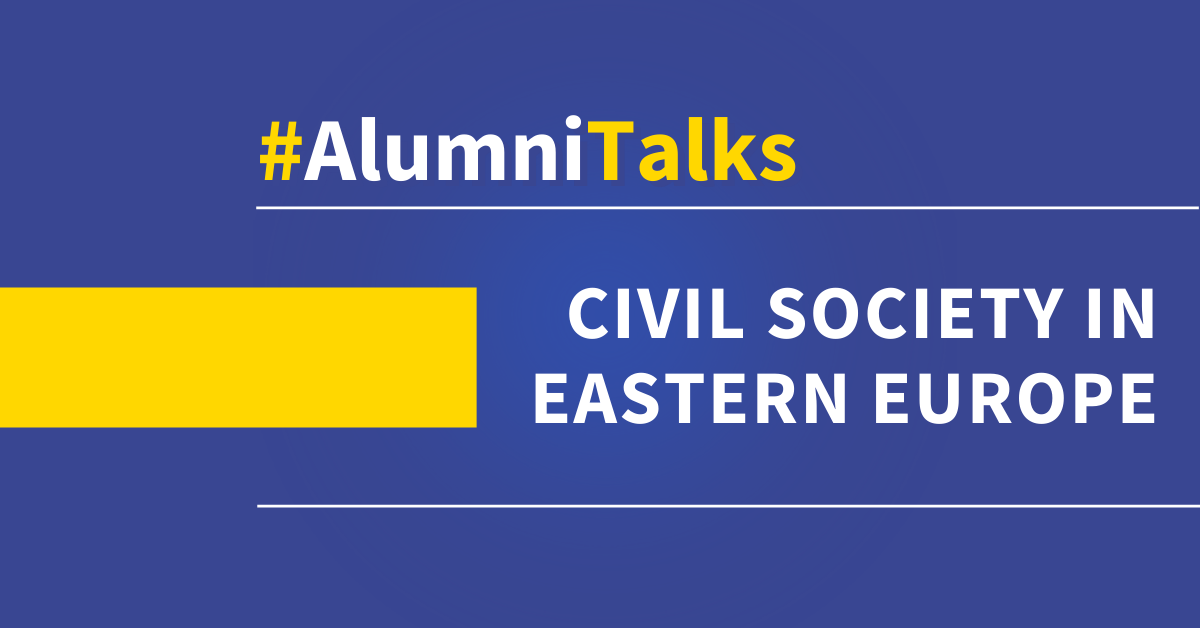 The European Youth Parliament has the capacity to connect people across the continent and even the world. It does not stop doing so when volunteers don’t attend EYP conferences anymore – these former members, or Alumni, can continue to (re)connect through our Alumni activities. Alumni Talks create a space for EYP Alumni to engage with each other, active members, and societally/politically relevant topics of today.

Prompted by recent attacks on civil society across Eastern European countries such as Belarus and Georgia, a panel of Eastern European Alumni were invited to discuss the role of civil society in societal changes since the collapse of the USSR. On November 3rd Ani Chkikvadze (GE), Hovsep Patvakanyan (AM), and Vasyl Myroschnychenko (UA) gathered online to share their perspectives, facilitated by the EYP’s former Executive Director Jan-Philipp Beck (DE). Having co-founded in Eastern European countries or organised large-scale EYP events in the region, these speakers could shine a light on the role of youth and civil society in post-USSR nation states.

Together with Jan-Philipp, the speakers reminisced about starting civil society organisations as active youngsters. What inspired them to get involved in NGOs? How did EYP help them develop as a young citizen and connect to their peers?

“Organisations like EYP and many other youth organisations create an alternative reality for youth, to see what the educational system can be, what raising your voice can be like, and how the policy-making procedures can be applied.” – Hovsep Patvakanyan

Before diving into the role of youth, they touched upon what it was like for them to grow up in a region characterised by instability and uncertainty flowing from the fall of the Soviet Union. What does it look like to find yourself amid an East-West power struggle? More importantly, how do you fight for your rights and liberties in that context?

“It is very important to talk about the issues of freedom, independence, human rights and all these European values. Because, in a way, when you live in a well-off country in Europe you lose track of it. You cannot really feel the value of freedom because you have always had it and you take it for granted. What the value of our countries is, is that we really know how precious it is, especially when we lose it.” – Vasyl Myroshnychenko

Before wrapping up, they contemplated the future of civil society and what advice, or what hope, they had for youth – not only in Eastern Europe, but young citizens everywhere. Though values such as freedom and security are not to be taken for granted, a message of hope and resilience shone through. More than anything, the event reminds us all that dialogues such as these create an important space to share knowledge and build our future together.

“My one wish for those coming after us would be: don’t become sceptics, because people in the region, in Georgia, Ukraine and Armenia, are fighting for very specific, concrete things, very basic freedom.” – Ani Chkikvadze

This event is supported by the Federal Foreign Office in the frame of the Civil Society Cooperation project “Youth Dialogue for Strong Civic Spaces”.