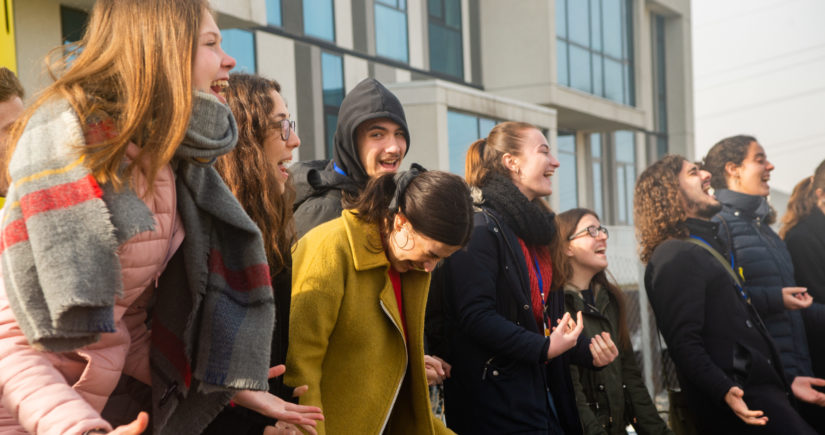 The 89th International Session of the European Youth Parliament(EYP) took place in Yerevan, Armenia in March 2019. For 10 days, almost 300 participants from 36 countries across Europe engaged in intercultural encounters and explored ways to be active citizens together. It was notably the biggest international youth event in the history of Armenia. Below are some of the session’s highlights.

The International Session was organised by EYP Armenia, a national member organisation the EYP network. The project was entirely youth-driven and prepared by volunteers between ages 18 and 26. It was notably the biggest international youth event in the history of Armenia. The International Session was themed around the motto: “Overcoming Global Challenges Together” and took place under the patronage of the Prime Minister of Armenia, Nikol Pashinyan. The event received substantial public attention, including the main news programme of Armenian television, as well as radio and newspaper coverage.

Participants from all over the continent shared their musical heritage and talent during a concert soirée. Furthermore, the participants were introduced to the culture of the session’s host country, Armenia. The participants also visited the History Museum, the Armenian Genocide Memorial Museum and were able to meet with ambassadors of their respective embassies to talk about the relations between Armenia and their home countries, as well as Armenia’s relations with the European Union.

The EYP offers young people spaces to debate the pressing topics of our time and to jointly suggest solutions.
In Yerevan, participants had a chance to develop and express their opinions on a wide range of topics, including access to education, cybersecurity, collaborative business models, the future of the energy sector, populism and the role of media. Experts from a variety of sectors provided background knowledge and shared a hands-on experience.

Thanks to Friedrich Schulte, the Head of Corporate Technology at innogy SE, the participants had a unique opportunity to engage in close-up conversations and gain new insights into the topic of technological innovations in the energy sector. Josué Mathieu, Advisor for Banking Regulation and Supervision at ESBG (European Savings and Retail Banking Group) introduced the participants to the topic of banking union and its implications.

Open and inclusive event for all young people

A group of ten young people representing Armenia and Georgia participated in the event. Among them were refugees and displaced youth from Iraq, Iran and Syria, an asylum-seeker from Afghanistan and an internally displaced person from Abkhazia. All of them actively contributed to the session’s elements, starting with experience-based team building and working in international groups, to actively engaging with topics during committee work as during the General Assembly debates on the proposed solutions.

Young people in dialogue with decision-makers

The session offered multiple opportunities for young people to interact with high-level representatives from the worlds of politics, business, culture and academia. The list of prominent guests and speakers included:

While expressing our gratitude to the partners, we would also like to congratulate EYP Armenia and the organising team for all their effort that made the EYP International Session in Yerevan a big success.

For more information on our International Sessions, please see our page here.