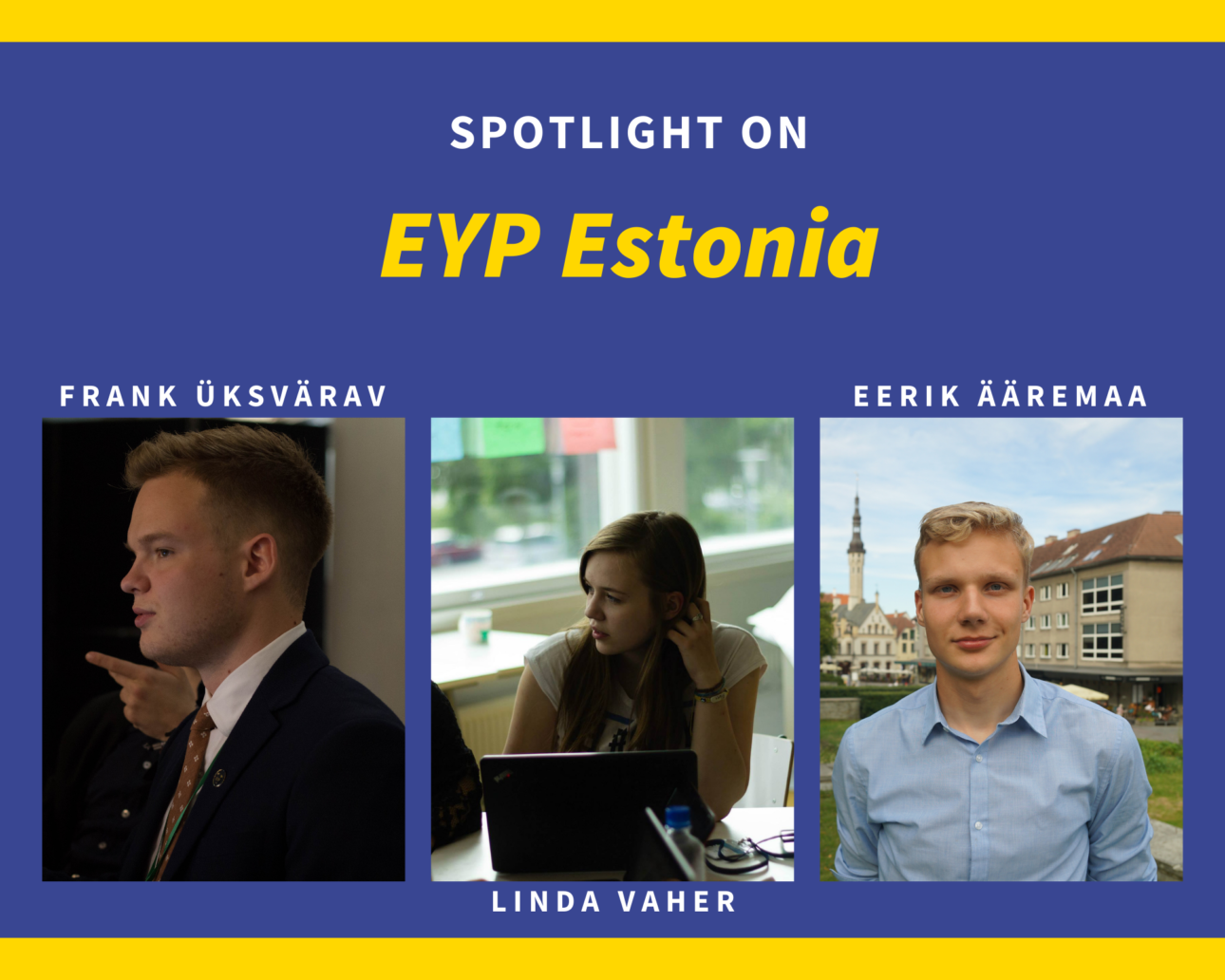 In Estonia, the national EYP organisation is not actually called “European Youth Parliament Estonia”, but Tegusad Eesti Noored! If you want to know what that means and why they call themselves that, keep on reading!

The EYP is made up of 40 different national organisations, all with their own histories, perspectives, and people. Today, we’re putting EYP Estonia in the spotlight! In this NC Spotlight instalment, three people of EYP Estonia, Frank Üksvärav, Linda Vaher, and Eerik Ääremaa tell us a bit about themselves and about what makes them proud of their National Committee.

Can you tell us a bit about yourself? How did you get involved in EYP?

Frank: I’m Frank, member of EYP Estonia since 2015 and been to almost 20 EYP sessions since. I got involved in a very spontaneous way – a classmate invited me to come to a session as a delegate during a break from school and I just sort of signed up and went, not wanting to spend my fall break doing nothing. And the rest, of course, is history!

Linda: My name is Linda, I am 23 years old and study law at the University of Tartu. I’ve been involved with EYP since October of 2014, when I attended my first session that I was invited to by a schoolmate who was part of the sessions organising team.

Eerik: I’m Eerik. I initially got involved with EYP after walking into a stop sign and getting 7 stiches to the top of my head. Later that day, when returning from my little adventure to the ER, I was walking home when my best friend, and a board member of EYP Estonia at the time, called me and invited me to the International Forum of EYP Spain held in 2018 in Galicia. He’d been bugging me to join a session for the longest time and I’m not sure what it was, but I finally gave in and said an enthusiastic yes, with a shakiness in my voice that can only come from excitement and anxiousness for what’s to come.

What position do you hold in EYP EE?

Frank: I’m a member of the Board of EYP Estonia since 2019 and currently fulfilling the role of President within the Board.

Linda: I was a member of the Board of EYP Estonia from 2017 to 2020. In my role I was mostly responsible for representing Estonia at the BNC meetings, but I did a lot of internal management as well in during my terms.

Eerik: I now thank that stop sign every time I pass it, as hitting it has been the best accident in my life so far. I’ve made connections and memories that I am sure I will cherish for a lifetime. I have since then taken up the position of Regional Development Coordinator at EYP Estonia, acting also as a board member of my proud republics national committee.

What is special about EYP Estonia?

Frank: Oh, there are a lot of things that makes our EYP Estonia stand out. Whether it’s the fact that our National Committee also is involved with non-EYP projects and events, or that it is perhaps the cosiest National Commitee out there. Everybody knows everybody and so it’s really a chill atmosphere. Another thing that separates us from the rest is our strong snack game – EYP Estonia events have, in my completely unbiased opinion, the best Coffee Breaks.

Linda: EYP Estonia is quite small, so members quickly learn to how to be resourceful to make our events great. If you have a problem, you can ask your fellow members and there is always a solution that can be found – often out of box idea, but we make it work. It is very tight knit group as well, so once a member, always a member. Fun fact: Storage cleaning events are one of our most popular member events!

Eerik: What sets my National Committee apart from most other NCs is that we are a bit more than just EYP Estonia. We refer to ourselves as Tegusad Eesti Noored (TEN), which roughly translates into The Active Estonian Youth. Apart from organising everything related to EYP in Estonia, we also hold different events and programs for the Estonian youth, offering them a form of non-formal education and a chance to give back to their communities and to let their voices be heard. I sincerely everyone finds their stop sign to walk into to grant them a lifetime of marvellous memories and experiences.

What impact do you think EYP initiatives have on the young people in your community?

Frank: For me, the biggest impact of EYP events on young people in Estonia is how it enables us young Estonians to build up friendships with our peers all around Europe. By being in touch with people from all corners of Europe, we realise that people abroad are not so different than the people at home and the challenges that people in our countries face are often exactly the same. With this realisation, we are able to appreciate the struggles of different European countries and develop a sense of solidarity that goes beyond Estonian borders.

Linda: EYP initiatives always have very strong impact on young people around here. All the people who have actively participated in our events have gained new skills or improved existing ones, from expressing themselves to expanding their academic English. EYP also has helped youth to expand their world view and discover new points of view.

Eerik: I love the European Youth Parliament because it’s all about giving back and offering a form of education we don’t really get from schools. I love it because it not only educates the youth on important topics like politics of the EU and the world, but also gives them a voice to express their opinions. Not only that but it also gives them unmatched experience in organizing large social events and develops skills like public speaking, communicating with your peers and all sorts of other very valuable social skills. I can’t also forget all the connections, friends, memories and good times gained from every little encounter with EYP. You can’t really compare making foreign friends and feeling like Europe is one giant community to anything else.