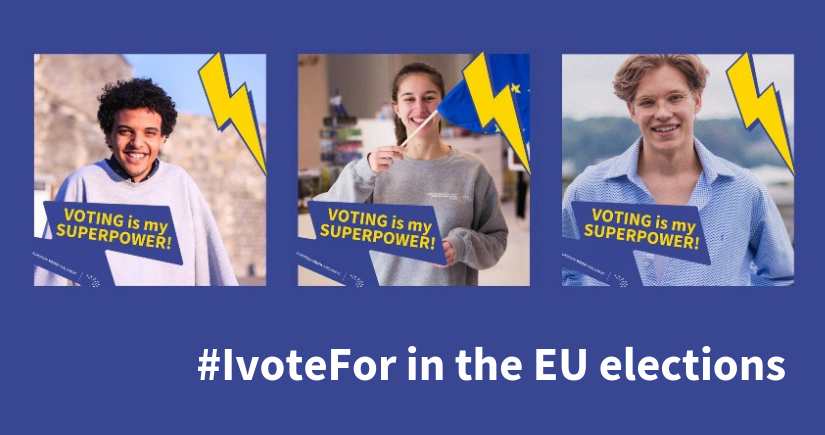 The European Youth Parliament encourages young people to make use of their voting rights, also in the European elections. The EYP #IvoteFor campaign invites youth to name their own reason to vote. We asked Catarina, Jonas and Vincent who initiated the campaign about their experience with mobilising others to vote.

In EYP, we offer young people the space to actively engage with democracy, not just during elections, but in everyday life. A special EYP working group, the European election task force was formed by young volunteers to come up with a plan on how to get more young voters to have their say in the European elections. Catarina (BE), Jonas (DE), Vincent (DE) and Noura from the EYP Governing Body, supported by Barbara from the EYP International Office, initiated the first-ever EYP international pro-vote campaign that aimes at leveraging the power of the EYP network active across Europe and contributes to increasing the voters turn out. The campaign and the EYP election-related activities were reported by the international media, including Euronews and the BBC. Watch the campaign video here. We asked Catarina, Jonas and Vincent who initiated the campaign about their experience with mobilising others to vote.

Tell us a bit about yourself and why you decided to volunteer your time to encouraging others to vote in the European elections?

Vincent: I am a political science student that is very passionate about quite a variety of things, including politics and Europe. I credit my involvement in EYP for the spark that ignited my interest in politics. In essence, I felt like doing it because I wanted to do my part of working for the change I want to see, no matter how big or small my impact ultimately ends up being.

Catarina: I am a 20-year old Business Engineering student living in Brussels who discovered a passion about European politics and youth engagement after joining EYP Belgium in 2015. By coordinating the Understanding Europe project in Belgium for two years, I got introduced to the core mission of the project of strengthening youth political participation in Europe. It was launched by the Schwarzkopf Foundation after realising that the voter turnout among the young electorate was only at 27% in 2009. It didn’t get higher in 2014, so it just felt natural to join the EYP Task Force and try to directly contribute to it.

Jonas: I’m a very active and sociable person that likes to philosophise and focus on the positive sides of life. I decided to join this task force because I’m convinced that Europe is going through highly unstable times. Euroscepticism, anti-immigration sentiment, Brexit, or the emergence of the concept of illiberal democracies in European discourse are substantial issues, the resolution of which will shape the future of Europe. Thus, I was sure this year’s elections would be decisive.

Jonas: What I liked most about working in this fantastic task force was the opportunity to work so closely on furthering a cause I personally felt extremely attached to with a small team of such lovely, dedicated individuals. Further, I think it provided me with valuable insights into the workings and challenges of political campaigning, which, who knows, might someday be part of my actual vocation. I also had the opportunity to gain first-hand experience in both creating, and managing a semi-long-term project, which I had not previously gotten the chance to.

Catarina: The most important thing that I can take out of this experience is that even a small group of people can achieve great results if they are truly motivated, have a clear goal and are willing to let their creativity flow. Incidentally, I also learnt that people tend to be a bit reticent to posting videos of themselves on social media, particularly if they are not very active “posters” in day-to-day life, so a catchy picture with a strong message works best if you want your challenge to go viral!

Vincent: I really enjoyed working together with such amazing and dedicated people. The simple fact that I got to be a part of the process is what I am perhaps most grateful for and what I enjoyed the most. I believe my biggest takeaway is the realisation that the potential small groups have in achieving a certain goal should not be underestimated.

Is there a unique perspective you brought to the task force in terms of background, experience, culture, education?

Catarina: As a Portuguese citizen growing up in the multicultural city of Brussels I really got to experience and understand the European motto ‘United in diversity’. Nowadays, I feel neither 100% Portuguese, nor 100% Belgian, nor even 50-50%, simply European, which sounds extremely cliché but true at the same time.

Vincent: Growing up, I was always very in touch with my Polish heritage but being the first generation born in Germany, I also felt pretty German. And like many other children of immigrants, I also questioned what exactly defined my identity, whether it was my upbringing, or my surroundings, etc., and what I was “supposed” to feel like. I could never confidently point to one or the other, but what I can confidently say now is that I feel European.

The EYP election-related activities were reported by the international media, including Euronews and the BBC. Read more about how the EYP encourages young people to vote in the European elections here.