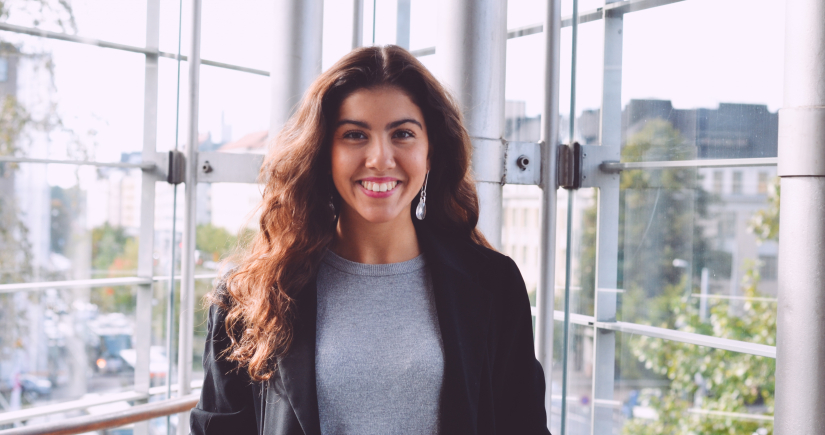 “In order to impact real change, we should not ask ourselves who we do things for, but rather who we do things with. It’s about getting everyone on board this shared mission. In creating inclusive and cross-sectorial movements. EYP has opened up many doors for me. The initiative that I am currently involved in is a great example in how you bring people with different perspectives and backgrounds together around the same table” – says Noura Berouba, an active EYPer since 2011.

We have asked Noura (24) how EYP involvement has impacted her path. Noura was a member of the Board of EYP Sweden (2012–14). Currently, she is also in the EYP’s Governing Body. Furthermore, she has been active in several other programmes and projects. Here is what Noura shared with us.

How would you describe yourself in one sentence?

I’m a 24-year-old multi-tasker, mobilizer and advocate for youth participation, human rights, peacebuilding, active citizenship and the UN Sustainable Development Goals, active in both the Swedish and European civil society.

Can you tell us more about the latest initiative that you are involved in? What is it that you do and why is it important to you? What is the social impact?

I’m involved in a couple of initiatives. This year, I was invited to join the Swedish Government’s advisory Council for environmentally sustainable consumption, was elected to serve on the board of the National Council of Swedish Youth Organisations (which gathers over 700 000 youth in over 80 organisations), and started and became the Vice Curator of the Stockholm Hub of the World Economic Forum’s Global Shapers Community.

The most recent initiative I joined was FutureTalks, a community consisting of people of all ages, backgrounds and nationalities, representing a multitude of sectors. In August, we embarked on an Arctic expedition, seeing the effects of climate change first hand, and engaging in discussions that will define the path forward for humanity and our planet. In order to impact real change, we should not ask ourselves who we do things for, but rather who we do things with. It’s about getting everyone on board this shared mission. In creating inclusive and cross-sectorial movements. Climate change (or any other issue) can’t be solved in silos, with politicians, scientists, civil society, activists or business leaders working separately. FutureTalks is a great example in how you bring people with different perspectives and backgrounds together around the same table.

How does your current involvement relate to your EYP experience?

Many of the things I’m involved in are directly related to my EYP experience.

In 2016, I was selected to be the Swedish youth representative to the United Nations, after being nominated to the role by EYP Sweden. I’m happy to see many EYPers seize this opportunity. Several rows in a year, we have had EYPers representing their countries and governments at the UN. Luxembourg, Finland, Switzerland, Georgia and the Netherlands are just a few examples.

My role on the National Council of Swedish Youth Organisations (LSU) was also enabled by the nomination of my National Committee, which is the member organization of LSU. My involvement in FutureTalks and the Global Shapers Community is connected to my EYP experience as I met representatives of these organisations through my involvement in EYP.

In your opinion, how much, and in what way did EYP help you get where you are now?

EYP made me curious about the world and gave me concrete tools and confidence to go out and change it. In EYP I was exposed to knowledge, people, forums and experiences I would never had otherwise. It was also through EYP that I gained skills that I wasn’t able to attain through high school or university, and where I was given a platform for personal development. EYP has opened up many doors for me. I hope I can be a living example that EYP provides young people with opportunities, knowledge and contacts allowing us to be active citizens and impactful in our communities. I recommend all EYPers to seize the opportunities EYP provides us with.