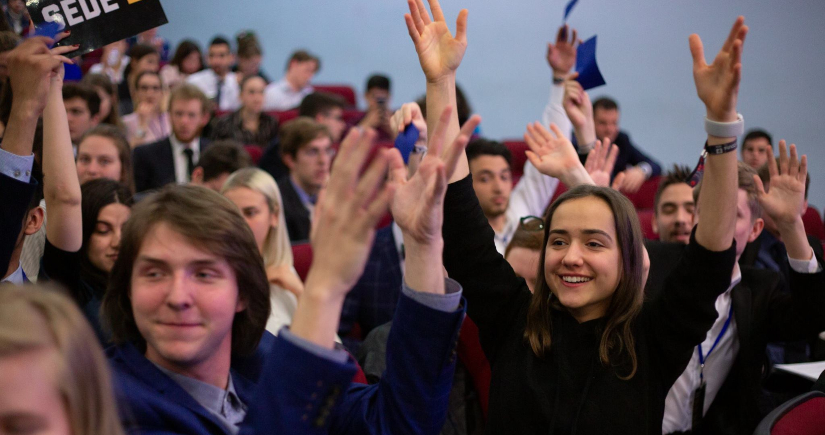 How will European democracy look after the elections in May? Will young people feel more represented? In 2014, only 28% of 18-to-24-year-olds voted in the European Parliament elections, compared to 51% of those aged over 55. The European Youth Parliament (EYP) encourages young voters to make use of their voting rights. This peer-to-peer educational programme offers young people the space to actively engage with democracy, not just during elections, but in everyday life.

“In EYP, we have experienced many times that young people love to discuss important topics of our time, and that they bring an important voice to the table”, says Lukas Fendel, Executive Director of the European Youth Parliament. EYP volunteers across the continent have organised panels and seminars with young political candidates and media campaigns giving a voice to young people. In Sweden, the EYP invited the youngest generation of EP candidates to discuss their visions for Europe with young people. EYP Germany helped organise an election-related event in a football stadium. EYP Luxemburg, Belgium, and Finland are participating in the European Youth Week in Brussels. Many EYP national member organisations support pro-vote campaigns (EYP Belgium, EYP Finland, EYP Spain and EYP Slovenia). EYP volunteers from different countries have also joined an international task force to increase voter turnout in the European elections.

But how can young people have meaningful opinions on climate change, the rise of populism and the mistreatment of migrants? Do they care about the future of Europe, the use of renewable energies and equal access to education? The EYP offers proof that young people care. “Through EYP, I got interested in European issues and politics. Before that, it was all never something that I really thought or cared about. Now it is very close to my heart. I vote in the European elections because it’s important to have your voice heard,” says Kerstin (age) from Austria.

From Spain to Lithuania, from Finland to Italy, young people involved in the EYP actively engage in shaping the world around them. They care about Europe and want to have their say in times when the European project can no longer be taken for granted. “We do have a voice. We are here to express it and let everyone do the same in order to shape Europe the way we want,” says Gloria (age) from Italy. What does Europe mean to young people and why do they want to vote in the European elections?

About the European Youth Parliament

How is it possible that an educational programme that started in France in 1987 has turned into a vibrant, peer-to-peer-driven network, gathering more than 30,000 young people from across Europe every year? The key factors have always been trust and empowerment. In the EYP, young people are trusted to discuss topics that really matter. Topics range from human rights, healthcare and the future of energy sector. As the EYP network is entirely youth-driven, young people learn from their peers about how to be open-minded, active citizens and how to solve problems in democratic ways. Unlike it is often the case at school, they feel that they can do things their own way. In the EYP, contributions and taking responsibility are valued. The European Youth Parliament is a non-governmental, non-profit organisation present in 40 European countries.